10 years ago my good friend Suski founded the gunnery sisterhood of fat Katherina, a club with exclusively female members. The sisterhood says about itself:

We reconstruct and operate cannons from the 15th century with historically accurate equipment and historically incorrect, fake moustaches. Our main focus is on re-enactment shows and champagne.

Sisterhood meetings traditionally begin and end with the beheading of a bottle of champagne. To develop this tradition Suski wanted to build a chest and surprise the rest of the sisterhood with this chest for the 10th anniversary.

The chest should hold three bottles and a dagger or sword. The sword serves to open the bottles. At the beginning of the project there were also considerations to integrate 18 drinking vessels, but we discarded this, due to the lack of suitable drinking vessels.

In the 15th century, metal fasteners such as nails were prohibitively expensive and therefore inaccessible for such an application, which is why only wood fasteners were considered. Even a clasp or hinge would most likely have been made of leather rather than metal.

Therefore, all wood joints were chosen so that they could be glued together. In the 15th century, such a wooden box would have been transported on horses or pulled wagons as part of the equipment of the gunners – therefore we used a light, but also relatively soft European coniferous wood.

A wood joint that can also be produced and glued well in the 15th century is the rebate. All connections of the chest were made as glued rabbet joints.

The chest should offer space for three bottles and a sword to open. That’s why we used three “ribs”. We cut out the geometry of these ribs with a CNC-milling machine – a large part of the construction of the CNC-milling machine is, as it would have been customary in the 15th century, also made of wood.

After the woodwork was done, Suski made a clasp and hinge for the lid from leather straps. The leather straps were knotted to the lid with twine.

Since the bottles were not to be opened regularly, but rather beheaded, an appropriate tool was needed in the box. Normally you either use a heavy knife or a sword.

Here Suski has chosen a traditional tool, which was used as a weapon in the 30 year war. This kind of knife / tool / short sword is called “Hukari”.

A hukari is a multi-purpose tool for recreation and forestry. As a combination of hatchet and large knife, a Hukari is relatively light and handy – yet strong enough to branch, bark, carve and even fell small trees. […] It was the sword of the Swedish army and was called “Hukari” there

We wanted to make two knives – one for the sisterhood, the other one for Suski’s sailboat, where sometimes in the evening a bottle of champagne is to be beheaded. So Suski bought two blanks, without handle, because she wanted to make a handle that fits perfectly in her hand.

For the handle we used wood from a wild cherry – a cut of the material I had used for the fancy living room lamp. With a flatbed scanner we made an image of the silhouette of the knife handle to create an exactly fitting cut-out with the CNC milling machine.

After milling out the cavity for the handle of the knives, Suski further shaped the handles by hand and produced the outer form. To make the handles round she used a grinding machine and a lot of patience. After the shape of the handles was made, we glued the handles with epoxy.

After sanding off all epoxy residues, and a few finer grinding passes, the Hukari presented itself like this:

The hukari works for beheading bottles and lies well in the hand.

On 3. May 2019 a bottle was beheaded with the Hukari from the chest to open the festive session for the 10th anniversary of the sisterhood. The chest has become part of the inventory of the sisterhood and is regularly used to open or close meetings. 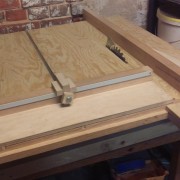 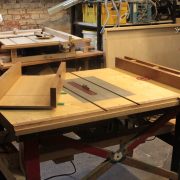 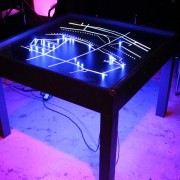