The existing curtain hooks left a lot of space between curtain and curtain rail, so that already early in the morning too much light entered the salon. Here on the picture the old hooks are visible in white.

In the software Autodesk Fusion 360 I drew a new design, which is shorter in itself and thus pulls the curtain closer to the rail. First I printed a (white) prototype, which turned out to be functional and did not need any further changes.

There was another curtain system on board the boat, which is used to create some privacy with curtains between the forward cabin and the saloon. Due to the location of the curtains it is easy to break the predetermined breaking points of these hooks. I myself broke several of them. While printing the large number of small hooks, I also printed three prototypes for the large hooks.

The new hooks also fitted and ensured that guests in the bow cabin could sleep a little longer in the morning because there was considerably less light entering the boat. They can now be broken as often as desired, as the hooks can be easily reprinted.

The files are available for download for use in Fusion 360. 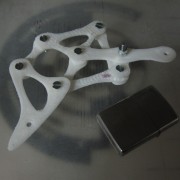 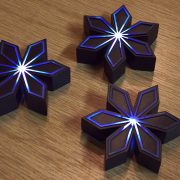 Yo, listen up here's a story About a little girl T