Every four years the CCC e.V. organizes the Chaos Communication Camp – an event which is not unlike a festival, only there are no musicians on stage, but lectures are held.

The participants of this event organize themselves predominantly in so-called “Villages”. There are regional Villages, e.g. all Nerds and Hacker from a city, in addition, there are also thematic Villages, like e.g. the Freifunk-Village. Since the event area borders directly on the upper Havel and there is a harbour for yachts, there were also several participants, who arrived with a boat.

The participants, who arrived on a boat, also wanted to build a village in the harbour area. Lucky Green did all the planning and organisation for this Village, thank you very much!

Since the harbour area is only a few hundred meters away from the official camp area, it was important to Lucky that we have a clear signposting and some information printed in order to make clear to all participants that the harbor also belongs to the Villages. I agreed to make various designs for it.

Except for the flag, all these designs were created by me, following the design guide of the organizers in detail and trying to stay as close as possible to the official design.

Unfortunately I do not have a photo of all the objects I have designed. So if you still have a photo of designed and printed objects in the harbour of the CCCamp2019, I would be happy to receive it. 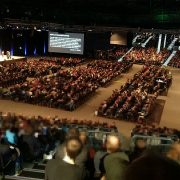